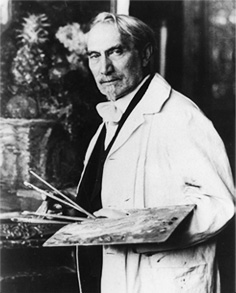 LEONID AT HIS EASEL, GERMANY 1930s

Leonid Pasternak, a leading Russian Impressionist, was an artist with wide European cultural interests. He was born in Odessa on the Black Sea in 1862, and taught in the Moscow School of Art from 1894-1921. Here he was the friend and colleague of the artists Repin, Serov and Levitan. He studied in Munich as a young man, and travelled extensively in Europe before the Revolution. He married Rosalia Kaufmann, a gifted pianist, who bore him four children: the eldest was the poet, Boris Pasternak, author of Doctor Zhivago. In 1921 Pasternak with his wife and two daughters left Moscow for Germany, where the artistic milieu included his friends Max Liebermann and Lovis Corinth. Following the rise of Hitler, Pasternak came to England in 1938. The last years of his life were spent working in Oxford. The Pasternak Family Collection is held in the house where he died in 1945.

Sketches of family scenes – his wife at the piano, and their four children reading and playing - are among his most intimate and charming works. His landscapes stretch from the Black Sea to the Bavarian Alps and Palestine.

All rights reserved © The Pasternak Trust 2019.